A National Conversation on Religion and Disaffiliation in America

Church Must Become a Better Listener 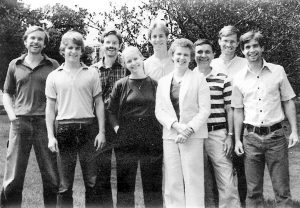 One of my mom’s many fond recollections of my dad, who died 23 years ago, is the patience he always showed with us kids. An example she likes to share has Dad sitting up until late-late on a work night, long after Mom had suppressed her last yawn and gone to bed, listening respectfully while one of his teenagers delivers a soliloquy aimed at dispelling him of one or another of his cherished values or beliefs, often a religious one. Like most teenagers and young adults, my five brothers and sister and I grew up with plenty of questions and decidedly more answers. When I had become an adult and finally humble enough to take some good-natured ribbing, Mom once gave me as a birthday gift a small plaque commemorating my teenage hubris. The plaque reads: “I am not arguing, I’m just explaining why I am right.”

I have long since come to appreciate that I grew up in a home where questions were not just tolerated, they were encouraged. Sex, politics, sports, religion—anything and everything was fair game to discuss at our dinner table. There was just one ground rule: be respectful. That was the Golden Rule for debate. And probably because our parents practiced what they preached, I believe we largely followed it.

I’m thinking of all this as I consider the results of a recent national study of young adults, raised Catholic, who have thoughtfully chosen to disaffiliate from the church. One of the biggest reasons for leaving, according to those surveyed and interviewed for the study, is that they have felt unheard, particularly when it comes to their opinions, questions, and beliefs regarding religion and faith.

“This study was all about young people telling their stories of why they left the church in their own words, uncensored and unfiltered,” said John Vitek, president and CEO of Saint Mary’s Press and coauthor of the report, Going, Going, Gone: The Dynamics of Disaffiliation in Young Catholics. “Some of what was said by youth about the Catholic Church is disturbing and unpleasant, but it’s critical for church leaders to hear it without casting blame or trying to explain it away.”

Indeed, listening is a critical place to start—but the quality of listening matters greatly as well. Not all listening involves hearing, and not all hearing is done with an openness to true understanding, and even the possibility of being changed oneself. At its worst, listening can be patronizing, even condescending. Listening can be driven by selfish agendas, the only goal being the eventual conversion of the person doing the talking to one’s own attitudes and beliefs. (Paraphrase my mother’s plaque to me: “I am not ignoring what you said, I’m just explaining why I am right.”)

The disaffiliation study reported: “Though many in this [study] group were involved in Catholic education, parish religious education, and youth ministry, they expressed deep disillusionment and frustration that their questions were never answered or that they didn’t have the opportunity to voice their questions in the first place.”

I’m reminded also of the experience of many women in the Catholic Church. A recent article in America magazine carried this headline: “Parishes should welcome women who feel unheard, Catholic leaders say in response to ‘America’ survey.” (America, Feb. 5, 2018)

The survey being referenced provides a fairly detailed profile of American Catholic women. The survey was commissioned by America Media and conducted by the Center for Applied Research in the Apostolate (CARA) at Georgetown University, in partnership with GfK, a survey firm. CARA also helped conduct the study on disaffiliation in young Catholics, in partnership with the Saint Mary’s Press Catholic Research Group.

Kim Daniels, a member of the Vatican’s communications advisory body and a former spokesperson for the president of the U.S. Conference of Catholic Bishops, said conducting such a survey of Catholic women is well justified. Ms. Daniels told America in an email: “Catholics are a family: we’re joined together by our baptism in Christ. Women are at the heart of that family in so many ways, and women’s perspectives should be at the heart of conversations about how to build up the Church.”

“The first step in reaching people is to listen to them,” she said.

Which brings me back to my own family dinner table growing up, and something I remember even more vividly and fondly than the honest disagreements and debate. It’s the laughter. We were always laughing—at ourselves, at each other, at life. Levity leavened even the most serious topics. We could do worse in our discussions of faith and church than to share some good laughs.

Reflect back on your own experiences of “being heard”—or not being heard, particularly on matters of faith. We invite you to share them in the comment section for this site.