How Do We Honor, Ritualize Change, Absence, Endings? 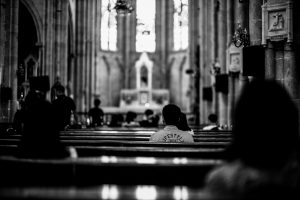 Photo by Luo Ping on Unsplash

In Going, Going, Gone: The Dynamics of Disaffiliation in Young Catholics, study coauthors John Vitek and Robert McCarty propose “two critical questions to ask ourselves as pastoral leaders as we consider the life stories of those who have disaffiliated from the Church.

Rabbi Jonathan Sacks, an international religious leader, philosopher, and author, describes community as that place “where they know who you are and where they miss you when you are gone.” (Charles Taylor and Jonathan Sacks on “The Future of Religion,” February 10, 2012, YouTube.com, tvochannel)

But such recommendations and observations beg two critical questions that we need to ask ourselves and our church communities.

Moving On in Sports and Business

What got me thinking about this topic of transitions and endings—and the human necessity to mark them well—was a recent article in the Harvard Business Review. The article, “Andrés Iniesta’s Farewell, and How to Make Endings Count at Work,” by Tim Leberecht and Gianpiero Petriglieri (May 30 2018), begins as a reflection on the final game played by soccer legend Iniesta for FC Barcelona. Iniesta had first affiliated with the club as part of its youth academy at age 12. The relationship had lasted 22 years; he had never played for another club.

The heart of the article, however, was a discussion of the lack of rituals and space in business organizations for “stillness, silence, sadness,” all of which we see reflected in a photograph taken of Iniesta as he sits on the field of play following that final game—alone, barefoot, eyes looking into the distance, in a state the article’s authors go on to describe as one of “animated suspension—a pregnant pause between old and new selves.”

Of course Iniesta’s life would go on. But for a moment at least following that last game, he was “a person in an empty space. A space in which the past is history and the future is yet to begin. It is a space we all visit, more or less willingly, ever more often as working lives get longer and careers more fragmented. It is common for people to change jobs over a dozen times in their lives,” write Leberecht and Petriglieri. They continue,

Scholars have a name for that space. They call it liminality, from the Latin limen, or threshold. It is a state of mind and a social space in which we are betwixt and between. Regardless of your line of work, it is easy in such moments of suspended animation to feel lost or stuck. But when we have rituals to guide us, and spaces to hold us, suspended animation turns into animated suspension—a pregnant pause between old and new selves.

Church Needs ‘Rituals and Spaces’ for Endings Too

As I read the Harvard Business Review piece, I found myself thinking about young adults (older adults, too, for that matter) disaffiliating from the church, and whether such endings—or maybe more importantly, the doubts, the struggles, the wonderings and wanderings that precede them—deserve some sort of recognition and ritualization as well, a respectful space to pause and honor those movements within our faith lives and the faith lives of others.

Continuing to read and reread, I began to substitute “parishes” and “churches” for “workplaces,” and “faith life” for “professional career.” I mentally reframed the following paragraph in the context of faith, belief, parish, and the larger church community.

“At many workplaces, we often lack the rituals and spaces to end projects and tenures. We don’t speak of ‘suffering through a game,’ as soccer players often do when they describe their efforts. We reward active emotions such as joy, happiness, and enthusiasm—or even frustration and anger, as long as they keep us going. We reduce love to ‘love what you do, and do what you love,’ but we don’t make much space for those hours or days in which love breaks our hearts. We want our passion focused on performance. We don’t want it to end.”

Mother Teresa, as revealed in a series of letters written over a period of 66 years (Mother Teresa: Come Be My Light [Doubleday]), experienced tremendous, excruciating doubt. She once wrote to a spiritual confidant: “As for me, the silence and the emptiness is so great, that I look and do not see,—Listen and do not hear—the tongue moves [in prayer] but does not speak. . . . I want you to pray for me—that I let [Jesus] have [a] free hand.”

Father James Martin, author and editor at the Jesuit magazine America, discussed the book collection of those letters with Time magazine in 2007: “[The book] may be remembered as just as important as her ministry to the poor. It would be a ministry to people who had experienced some doubt, some absence of God in their lives. And you know who that is? Everybody. Atheists, doubters, seekers, believers, everyone.”

How best do we honor and minister to and with those who are going, going, and even gone from our midst?