Lauren Mickler describes her involvement in the Catholic Church growing up as “intense, in a positive way.” She attended Catholic preschool, public elementary and middle school, then Catholic high school. At home Sunday Mass was a given, and everyday Catholic beliefs and practices were assumed and routine.

But visiting with Lauren it is clear she also grew up in a home where—even if the “truth” of Catholicism might be assumed as given—serious questions could also be discussed, disagreement was treated with respect, and independent thinking and faith walked hand in hand. 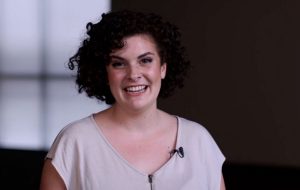 Saint Mary’s Press Research Group (SMPRG) talked with Lauren, now 22 and studying sociology, religion, and art, about her formation in faith growing up, and how she experiences faith today as a young adult in the church.

SMPRG: What were some of the gifts and challenges of growing up in a Catholic-centric environment?

Lauren: A lot of my favorite memories from childhood were from Vacation Bible School (VBS), and that experience inspired the entertainer in me.

[Lauren lists other gifts, as well as challenges.]

SMPRG: When and in what ways did you begin to feel unease and disconnect between your Catholic upbringing, your interior life, and the world you observed around you?

Lauren: In middle school, I began to question the church because I was starting to discover all these differences between me and other Catholics, specifically when I learned about the discrimination against people who identify as LGBTQIA+. After a lot of exploration on the topic through different conversations and articles and some scientific posts, I felt that there was enough evidence for the church to update our beliefs on it officially. There are so many more important, broader themes in the New Testament that encourage us as followers of Christ to love the new and different (even though they’re hardly different and definitely not new).

When I tried to talk about it with people, if they did agree with me, there was nothing they could do about it.

I didn’t really feel like I was wrong or less Catholic for believing in inclusivity and acceptance, I just interpreted things differently than some people, and I act accordingly.

SMPRG: At a national symposium in Baltimore in January, held to mark the release of the Saint Mary’s Press research study, Going, Going, Gone: The Dynamics of Disaffiliation in Young Catholics, you talked about your frustration over the absence of women deacons and priests in the Catholic Church, and over church patriarchy in general. You have said this makes it difficult for you to stay in the church as a woman. Can you tell us more about this?

Lauren: From the first time my parents explained to me that women can’t be priests or deacons, they could be nuns, I knew I would have a problem. I ignored it until high school. Once I started learning more about the church as a teenager and came face to face with what my peers believed, I started to speak my mind and do what I could to change things.

After high school, when I started to dive into feminism more, I felt so close to God, but so distant from the church, knowing I would have to work harder to be taken seriously. I didn’t know whether or not I wanted to stay. During college, I started to embrace being a Catholic when I started interfaith work, because then I was given other options, and nothing felt like home, or was as easy to connect with God, which is what I think is the point of religion. Interfaith work also gave me an outlet to engage in service work and long, intense conversations about the difficult and beautiful and joyful parts of different religious and philosophical worldviews, and share with people my version of Catholicism, and hopefully allow people who identify with the Catholic Church, but have the same problems as me, to find our community within the church.

SMPRG: In a video posted on the Catholic Research website, you describe yourself as a “spiritual Catholic with post-modernist philosophies.” Can you explain what that means?

Lauren: Spiritual: I believe that because God created everything in the universe, that there is a spark of divinity in everything on earth. That spark is most easily found in rocks because they are more permanent than organic matter, and their energy can be felt on an almost subconscious level. In a similar way, I believe in astrology because planets are teeming with forces like gravity, and I think that those forces affect humans in small ways. Overall, though, I believe in an infinite universe where anything is possible, so I’m not going to put limits on my intuition.

Catholic: I use the Bible, prayer, Mass, and the traditions of the church to connect to God, the people around me, and myself. I grow and change into a, hopefully, more loving and giving person through my relationship with Catholicism.

Post-Modernist: I have the belief that reality is not mirrored in human understanding, but rather constructed by individuals, with each reality separate and wholly unique. Realities are subject to change. For me, this basically means that the ultimate reality or truth of the universe is infinite and unknowable on our current plane of existence as humans, so there’s no point in arguing too heavily over who’s right and who’s wrong. However, that doesn’t mean that there’s no merit to discovery and exploration of the Unknown, we just don’t have to stress about it.

The only part of my identity I’ve found to be in conflict with the church is the last one. Because we recite that we believe in one, holy, catholic, and apostolic church, it’s kind of hard for me to say that because when I recite the creed, I’m only speaking for myself. As in, I believe in this church, I subscribe to this belief, [but I am not saying] I believe this is the one and only church and religion. I believe that anything is possible, and that at the end of the day, this is just our best guess.

SMPRG: If you were tasked with reimagining the Catholic Church as a community that young adults today might truly wish to affiliate with—what would it look like?

Lauren: [She lists the following characteristics.]