Let’s Make It Easier to Talk About God

Forty years ago, I spent a year teaching English at a Benedictine girl’s high school in the city of Muroran, on the northern island of Hokkaido, Japan. I was in my early twenties, fresh out of college, with very modest abilities in French and Spanish, and none at all in Japanese.

Jonathan Merritt, a self-described “student of American Christianity” and son of a “prominent megachurch pastor,” says our vocabulary of faith has been in steady decline. In a New York Times op-ed article (“It’s Getting Harder to Talk About God”), Merritt cites research that shows more than three-fourths of Americans today “do not have spiritual or religious conversations” for a variety of reasons, among them that people want to avoid tension or arguments and don’t like how religion has been politicized. 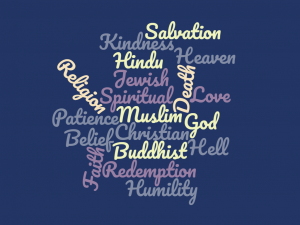 Also falling victim to this decline in religious or spiritual conversations are “religious and spiritual words”—the vocabulary of faith itself, argues Merritt. A Google Ngram search of word usage in books, newspapers, webpages, and speeches published over the past 500 years suggests “most religious and spiritual words have been declining in the English-speaking world since the early 20th century,” at least those that appeared in print.

And this is true not just of theological vocabulary, Merritt found, “but basic moral and religious words” such as “language about the virtues Christians call the fruit of the spirit—words like ‘love,’ ‘patience,’ ‘gentleness’ and ‘faithfulness.’ . . . Humility words, like ‘modesty,’ fell by 52 percent. Compassion words, like ‘kindness,’ dropped by 56 percent. Gratitude words, like ‘thankfulness,’ declined by 49 percent.”

Why does all this matter? Because words have power. Merritt writes: “an emerging body of research . . . reveals . . . our linguistic landscape both reflects and affects our views.”

At Benilde-St. Margaret’s School in St. Louis Park, MN, a new religion curriculum offers students “the opportunity to talk about faith as it relates to life. Each area of focus requires introspection and the wisdom that comes from a group conversation. Students begin to make meaning in a community where they participate in conversation and listening to the stories of their peers.” (BSM informational release)

To encourage and facilitate such conversations, the teacher assumes a role as “inspired conductor. By creating a space where students can voice their questions without judgment teachers become spiritual companions, walking with young people, becoming aware of moments in their life that have encouraged faith and discouraged it as well and leaning into those experiences.”

The curriculum is inspired in large part by a Saint Mary’s Press study on the dynamics of disaffiliation in young Catholics. That study revealed one of the biggest reasons young people cite for disaffiliating is a felt lack of opportunity to ask tough questions, express doubts, and wrestle out-loud with real-life issues.

The educational model for the curriculum at Benilde-St. Margaret’s is Lasallian, taking its cue from the renowned educator Saint John Baptist de La Salle and his desire that teachers “have the particular finesse of not reducing the educational process to teaching and training. Rather they basically present it (the subject) as inspired accompaniment.” (De La Salle and the theology of education)

So what’s the connection among speaking Japanese, a decline in religious vocabulary, and a new religion curriculum?

In Japan, no one shamed or intimidated me for my inability to speak their language. Rather, they “accompanied” me as I strove to learn Japanese—inviting me into their homes, encouraging me through my clumsy attempts at conversation, pantomiming when our words failed, asking to learn my language as I struggled to learn theirs. And over time, I achieved some degree of fluency, but only because I was given no cause to clam up or avoid trying. When I returned home a year later, I could hold my own in a conversation in Japanese, and my listening vocabulary was even better.

At Benilde-St. Margaret’s, they are making it easier, not harder, for young people to talk about God. Teachers are listening, honoring the necessity and right of students to speak in their language, open to receiving the students’ experience as the starting point for authentic conversation. Such efforts contribute to ensuring that “the students are all integral members [in the seminar-style religion class], bringing unique joys and struggles, thoughts and opinions.”

It is in such contexts that a vocabulary of faith develops. It takes time, patience, empathy, understanding, curiosity, and humility all around.