Why I Encourage Questioning Religion

Marjory Stoneman Students and the Responsibility to Speak

One of the findings of the recent Saint Mary’s Press study on the dynamics of church disaffiliation in young Catholics is the felt need of young people to speak and be heard regarding matters of faith and belief. One of the purposes of the Going, Going, Gone project and this website is to provide a safe and receptive space for those voices and their stories. 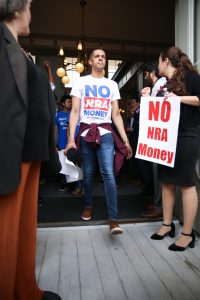 I’d like to take a moment to reflect on the flip side of that right to be heard: the responsibility to speak. And rather than discuss that responsibility in the context of faith, this reflection is devoted to witnessing the power of responsible speech exercised in a civic context—by the students of Marjory Stoneman Douglas High School in Florida. We will return finally to a cross-application to matters of faith and belief.

Since the day that 17 of their classmates and teachers were gunned down in yet another horrific school shooting, students from Marjory Stoneman have been vocal and articulate advocates for stricter gun control policies. No stage seems too big for them, as they speak at rallies and vigils, on national television and in face-to-face meetings with political leaders from state legislators to President Donald Trump.

Will the “grown-ups” listen? Will these teenagers see any practical results for their efforts? That doesn’t seem to be the litmus test for these students as they raise their voices for change. Rather, they’ve embraced the issue as worthy in itself, its value proven by their experience, and they are going to speak.

And we are seeing an impact from that witness:

Something else the Marjory Stoneman students so effectively demonstrate: the most effective speech is informed, listening speech.

In a case of somber irony, the students of Marjory Stoneman had debated gun control in class last November. After the school shooting, they put that debate preparation to work.

Marjory Stoneman sophomore Katherine Guerra, a debate team captain, told the Miami Herald: “We know what we want, and we have the research. We know how things work and that gives us more liberty to speak out because we’re not unsure of things.”

“The thing is in debate you have to argue both sides, which is also beneficial because as much as we want to change things we also need to see the different views,” she added.

Hindu spiritual leader and social activist Mahatma Gandhi once said: “Be the change you wish to see in the world.” The young people at Marjory Stoneman are being that change on matters of gun violence. Of course they hope to see results—but they aren’t going to depend on them. Like each of us, they carry a truth they are duty bound to share. And maybe, just maybe, they will see that change they wish for.

Said sophomore Sari Kaufman: “I don’t think we made a huge change, but we definitely moved the needle a little more than it was before.”

To return now to matters of faith and belief. Speaking one’s truth in an informed and respectful manner can inform and transform church institutions and the community of believers—but only if those institutions and believers exercise their corresponding duty to listen and to hear. The Going, Going, Gone project and the young people interviewed suggest that all too often that is not happening.

What more can and should the church community do? Offer suggestions in the comments section below. Change is possible and necessary. But it will only happen if we speak, listen, and respond with more than mere words.