Jonathan Lewis believes young adults are hungry for spiritual mentors. Now the ball is in the church’s court to provide them.

Lewis is one of three young adult Americans whom Pope Francis invited to participate in the Synod of Bishops on Young People held in October at the Vatican. Lewis also attended a Saint Mary’s Press-sponsored symposium in Baltimore in January on the subject of disaffiliation in young Catholics.

Saint Mary’s Press Research asked Lewis, who serves as Assistant Secretary for Pastoral Ministry and Social Concerns for the Archdiocese of Washington, about his four-minute “intervention” at the synod. In that statement, Lewis argued that young adults today need and want spiritual mentors, and that the Catholic Church is not adequately responding to this reality. 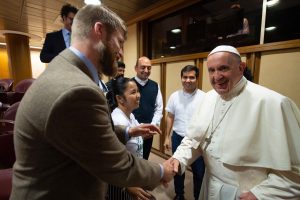 Jonathan Lewis greets Pope Francis during the Synod of Bishops on Young People in October at the Vatican. (Contributed photo)

What Makes an Effective Mentor?

Asked to describe the qualities of an effective spiritual mentor, Lewis cites the final document issued from the presynodal gathering in March in Rome.

According to the document, a spiritual mentor should be

To be effective, said Lewis, mentors need to “be who [they] are and be that well, to model trust and reflect the goodness, truth, and beauty of God in their daily lives. When people see that they can become intrigued and are being attracted to Christ through us. To be effective, the social and moral tradition of the church must be embodied in us.”

While being an effective mentor may be intuitive for some—such as effective catechists, coaches, and teachers—“for others it doesn’t come intuitively, it needs to be taught and caught—modeled for them as well,” said Lewis.

The church needs “a culture change, before any program change,” said Lewis. The church must transform the culture of parishes and communities so that mentorship and accompaniment become normalized, he said. “Programs alone don’t work. Transforming culture is slower and more difficult work.”

Mentorship Must Go Both Ways

To be authentic, mentorship must be reciprocal and not one-way, said Lewis. “In a real mentor-apprenticeship relationship, both people benefit,” he said. Referencing the prophet Joel (3:1), Lewis said young people need elders for their vision, and elders need young people for their dreams.

“We need these relationships. Anyone who thinks they have nothing to learn, that they can teach without a dialogue that includes listening, isn’t setting up the young person for success.”

Lewis also said this “exchange of gifts” between young and old must follow a pastoral model. “Age, theological training, or experience don’t ‘qualify’ someone to be a mentor—anyone can qualify. The mode in which one teaches is in a dialogue of faith modeled on Jesus, who asked lots of questions. The model is Christ on the road to Emmaus. It’s ‘Tell me about what you were discussing,’ not ‘let me tell you about the things you don’t know.’”

In his statement at the Synod on Young People in Rome, Lewis told the assembly that most young Catholics today lack spiritual mentors. “We did a survey [in the Washington Archdiocese] leading up to the synod. A lot of people who got the survey are active Catholics. Half said they don’t have an older adult mentor in their church. Correlate that with those who don’t come daily or weekly [to Mass]” and the number is even greater, Lewis said.

“Also many [survey respondents] said they don’t have a friend in the church,” Lewis added. “Traditional structures of Catholic life don’t always or often facilitate friendship or mentorship. We have to re-vision what those pastoral structures and pastoral care looks like.”

At the symposium in Baltimore, Lewis said his “aha!” moment came in a discussion of the “principle of relational authority.”

Lewis said parishes need to train adult leaders to exercise a relational model of faith and pastoral care, and that doing so can have a “transformative effect on church life.”

Adults too often have abdicated their responsibility to pass on faith to young people, Lewis said. “Family and parish used to have rich relational ties to pass on faith, but parents today don’t have that—many [parents] have disaffiliated in beliefs and practices, if not in name. Young people are being more authentic in declaring ‘None’” and naming the reality then adults who quietly disengage, Lewis said.

“There’s a great hope in that—[young people are] seeking radical authenticity, and when they see that in the church they will be intrigued and inspired to reengage. That starts with a person,” said Lewis, “someone who can listen to and engage questions, questions of the head and heart—not a video, a real person.”

“My suspicion is if people look around at successful ministry” that is taking place with young people, “they will find a dynamic mentor in their midst,” said Lewis.

“We need to become a more relationally credible community. We cannot allow young people to remain anonymous or they will continue to drift away. We need to know meaningful things in their life, like when someone’s mom gets diagnosed with cancer. Where are the spaces where we would get to know that?” Lewis asked.

“We cannot stay inside of our church and wait for people to come to us,” Lewis said. “We need a church that faces outwards, that reaches from the center of the church to the margins.”