Life has its pivotal moments: birth, coming-of-age, marriage, death. Traditionally people have marked such moments with family, friends, and for many, a faith community.

Those weakened affiliations can make times of loss particularly painful, and the hunger for meaning and connection at such moments particularly acute. 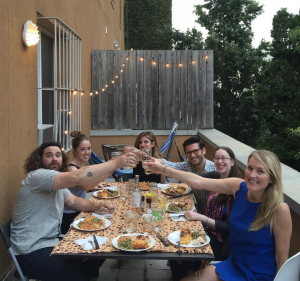 “Millennials are starving for spaces of meaning and connection in general, where they have permission to bring their whole selves to the table,” write Angie Thurston and Casper ter Kuile, both Ministry Innovation Fellows at Harvard Divinity School (“How We Gather (3): The Dinner Party,” On Being, August 19, 2016).

“Millennials largely lack both implicit permission and community context to talk about the things that really matter,” they write. “To openly process any formative experience, much less one of loss, takes tremendous courage. In The Prophetic Imagination, theologian Walter Brueggeman exalts the prophet Jeremiah for piercing the numbness of dominant culture by daring to grieve. The Dinner Party is today’s Jeremiah.”

Begun informally by five women in 2010, The Dinner Party (TDP) “is a community of mostly 20- and 30-somethings who’ve each experienced significant loss and connect around potluck dinner parties to talk about it,” according to the TDP website.

Descriptions of TDP often include words like “healing,” “transformative,” “sacred,” “spiritual,” “mission,” “meditation,” “family,” and “ritual.” Words straight out of the vocabulary of many more traditional faith communities.

The Desire for Sacred Spaces

Lennon Flowers, cofounder and executive director of TDP, said although young adults are disaffiliating in growing numbers from traditional religious institutions, the desire for sacred spaces and finding meaning in communities remains.

“We are still looking for spaces where we can talk about what we normally would have shared with a priest,” she says (“At This Dinner Party, Talking About Death With Strangers Isn’t Taboo,” Deborah Becker, National Public Radio, Jan. 2, 2016).

According to the organization’s website, the TDP “team” includes more than 250 trained hosts in more than 85 cities. The Dinner Party, which is not meant to substitute for professional grief support, provides participants encouragement, comfort, and healing at a critical moment in their young adult lives.

“The Dinner Party connected me with people who had lived my experience. I felt utterly alone in those experiences before connecting with others from TDP.” (Katy, Pittsburgh, current Dinner Partier)

“In the year since I’ve been with The Dinner Party, I feel like I’ve really become part of something. I have the most important thing in common with everyone in the room, even though our stories are so different.” (Sally, New York, current Dinner Partier)

And while TDP is not “religious” by definition or design, the elements of community, breaking bread, and a sense of the sacred echo more traditional religious practices. Becca Bernstein, a former host turned community director for TDP, finds resonances with her Jewish upbringing in TDP.

“Losing my mother at the age of 27 was a reentry point into my Jewish identity and in many ways helped hosting at Dinner Party and joining,” she said in an interview with Tablet Magazine (“Let’s Talk about Death,” Flora Tsapovsky, Aug. 21, 2018). “I was grateful to have rituals like shiva, and friends who attended my mom’s funeral said they want to be Jewish when they witnessed our relationship with grief. This inspires me to do my best work with Dinner Party.”

Ellen Koneck’s brother died by suicide three years ago. She said conversations such as those that occur at TDP are “hard to come by in the Catholic Church. In some ways it’s unfair to expect [differently], though—serious loss is so rare at a younger age that a given parish can’t necessarily gather a group around this particular type of wound; there wouldn’t be enough people around to start the club!”

Koneck added that suicide “is also a fraught and difficult conversation in Catholic settings in particular.”

She said in some ways, her experience with TDP and “in the pew” at a Catholic church are parallel. “I noticed I had very little in common with the other members of my dinner party group in New York; what we shared was our proximity to death and our age. It was a heterogeneous group—just like my experience of the church. The things that gather and unite us are a conviction, an experience, a cultural context and worldview. I don’t necessarily have much else in common with whoever is down the pew or across the table from me. But the power of what we share is much more than the sum of our differences and dissimilarities, because, I suppose, they’re the most important things we wrestle with in life.”

Koneck, who is acquisitions, sales, and marketing manager with Anselm Academic publishing, today resides with her husband and newborn son in St. Paul, Minnesota. She said she would like to continue her involvement as a host with TDP.

“I am really passionate about the need to de-scandalize discussions of grief, mental illness, suicide, loss, and trauma,” Koneck said. “I think as a society we are very poor at these kinds of discussions, and people don’t heal well when we push these issues to the side. My experience with TDP in New York made me think this was one forum for that kind of change.”

The vision statement on the TDP website supports Koneck’s appraisal. Begun in shared grief, TDP states that it hopes to normalize the human experience of loss, and to nourish the lives of participants. “We aim to realize a day in which . . . young people who have experienced loss are recognized not as objects of pity, but as better listeners and better leaders, characterized by profound empathy, resilience, and agency” (thedinnerparty.org/).