Two articles that crossed my desk recently brought to mind the religious and spiritual egalitarianism that typifies many young adults today. I was reminded that to label this egalitarianism as either belief in nothing or just wishy-washy relativism is both dismissive and unfair.

The first article came in the way of a digitally delivered daily meditation by Richard Rohr, a Franciscan priest and ecumenical teacher on mysticism. What caught my attention in this particular reflection were quotations from religious historian and author Karen Armstrong.

Rohr was citing Armstrong, a former Catholic nun, to help make the case for the virtue of “unknowing” and the ultimate and unfathomable mystery of God. “Our scientifically oriented knowledge seeks to master reality, explain it, and bring it under the control of reason, but a delight in unknowing has also been part of the human experience,” writes Armstrong in The Case for God (Alfred A. Knopf, 2009). “Even today, poets, philosophers, mathematicians, and scientists find that the contemplation of the insoluble is a source of joy, astonishment, and contentment.”

Many young adults today embrace this idea that faith cannot be subject to reason, and they perceive institutional religion with its dogmas as taking an opposite view.

The Value of Unknowing

Armstrong observes: “We are seeing a great deal of strident dogmatism today, religious and secular, but there is also a growing appreciation of the value of unknowing. We can never re-create the past, but we can learn from its mistakes and insights. There is a long religious tradition that stressed the importance of recognizing the limits of our knowledge, of silence, reticence, and awe. . . . One of the conditions of enlightenment has always been a willingness to let go of what we thought we knew in order to appreciate truths we had never dreamed of. We may have to unlearn a great deal about religion before we can move on to new insight.”

“It is not easy to talk about what we call ‘God,’ and the religious quest often begins with the deliberate dissolution of ordinary thought patterns,” says Armstrong. Might it be that many young adults are at just this point of departure in their religious quest?

Unlearning, unknowing, and letting go of inadequate beliefs often begin the religious quest, argues Armstrong, but they are not its sole purpose. On the website for the Charter for Compassion, which Armstrong began with the goal “to restore compassion to the central place of religious life,” Armstrong states: “I say that religion isn’t about believing things. It’s about what you do. It’s ethical alchemy. It’s about behaving in a way that changes you, that gives you intimations of holiness and sacredness.”

“Religion is hard work. Above all it demands a compassionate lifestyle. This is the test of religiosity in every single one of the major world traditions. Most of our doctrines were originally calls to action.”

Which brings me to the second article that got me to thinking about religious egalitarianism, not only as belief but also—in the words of Armstrong—as “what you do” as a believer.

Dr. Evan Atar Adaha is a surgeon and obstetrician in war-torn and dangerously unstable South Sudan. The sole surgeon in Maban Referral Hospital, he tends to patients whose needs range from bullet wounds to tuberculosis to neonatal care. Medicine is in short supply, and equipment and training are inadequate. But the doctor is undeterred. On Oct. 1, Atar received the 2018 Nansen Refugee Award from UN High Commissioner for Refugees (UNHCR).

If compassion is the stuff of true religion, as Armstrong suggests, Atar is a man of deep faith. And true to what many young adults are looking for from those who profess religious belief, his faith does not create boxes or build walls. 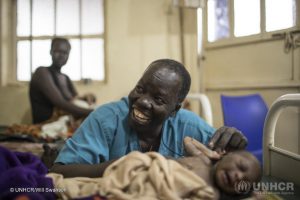 Dr. Evan Atar Adaha with the newborn baby of a refugee from Sudan in the maternity ward of the Maban Hospital in the town of Bunj, Maban County, South Sudan. The hospital conducts between 15 and 20 caesarean section delivery procedures each week in one of the most isolated and insecure areas of the country.

“My faith contributes a lot to my work,” Atar told Religious News Service. “I am inspired by a belief that we are all from one God. As we work, I keep telling my colleagues that we are one family and we must save lives. We treat everyone here regardless of who they are—refugee, internally displaced, host community,” says Atar.

Before performing surgery, Atar recites verses from the Bible or the Qur’an with his patients. He then makes a short prayer, again according to the patient’s faith. After this, he operates.

On Sundays, the doctor, who is Catholic, relaxes by going to church or taking a nap outdoors. He loves to sing and joke, and he says he gets his energy from drinking milk.

“They Will Open Their Heart to You”

Institutional religions are seeing a dramatic fall-off in affiliation. Maybe Atar’s medical philosophy offers insight into how mainstream religion might better respond to those both inside and outside its ranks.

“I am most happy when I realize that the work that I have done has saved somebody from suffering or has saved his life,” Atar said in an interview with UNHCR. “But healing is not the medicine alone. You have to assure the patient. The moment you relate to a patient, they will open their heart to you.”

Armstrong sees growth opportunities for all who engage in such a relational attitude to spirituality and religious belief: “Let’s go into dialogue prepared to be changed,” Armstrong told U.S. Catholic magazine in a 2009 interview. “That’s the only way dialogue works. Go into dialogue as you did in Socrates’ day, prepared in the end to realize that you knew nothing, to realize transcendence. No one can have the last word on God, and we can learn so much from other people’s insights.”