A National Conversation on Religion and Disaffiliation in America

A two-year national study explores why young adults are leaving the Catholic Church. Saint Mary’s Press released results of the study, Going, Going,
Gone: The Dynamics of Disaffiliation in Young Catholics, at a national symposium near Baltimore Jan. 16–18, 2018. The qualitative study shares the voices of young people as they describe their reasons for leaving the church. The Center for Applied Research in the Apostolate (CARA) at Georgetown University collaborated with the Winona, MN-based publishing house in conducting the study.

“This study was all about young people telling their stories of why they left the church in their own words, uncensored and unfiltered,” said John Vitek, president and CEO of Saint Mary’s Press and coauthor of the report. “Some of what was said by youth about the Catholic Church is disturbing and unpleasant, but it’s critical for church leaders to hear it without casting blame or trying to explain it away.”

To release the study and start a discussion, Saint Mary’s Press hosted a symposium at the Maritime Conference Center near Baltimore. More than 200 people attended the opening discussion about the findings. Two days of discussion followed, with more than 60 national leaders in the Catholic Church participating. A number of Lasallians were among attendees (Saint Mary’s Press is a Lasallian Catholic publisher), including three students from Calvert Hall College High School in Baltimore, who were present at the opening discussion. 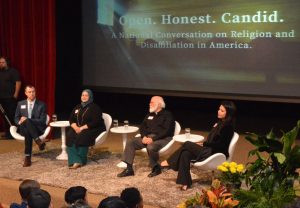 A panel discussion was part of the symposium opening for the release of Going, Going, Gone.

Listen to a recording of the discussion on Minnesota Public Radio

Matthew Mathai, a Calvert Hall senior and peer minister, attended the event to hear other perspectives and help him on his faith journey. He could relate to what he was hearing.

“When I was 13, I was making those questions,” Mathai said. “I was questioning, ‘What is this? What am I supposed to believe in? What is the purpose of life?’ And I think the biggest thing was that I was the one who took that initiative. And sometimes it’s not necessarily only on the parents, it’s also the church meeting me halfway. In my scenario, I met the church halfway. I was curious. I reached out, and my pastors and the church opened me up with loving arms. And it was through the church, and mainly through me, that I was able to find my way.”

Brother Timothy Coldwell, FSC, General Councilor for the Lasallian Region of North America, gave the closing address. Coldwell reflected on the days of discussion through the lens of Saint John Baptist de La Salle. He spoke about darkness and how students need educators to walk with them in their darkness.