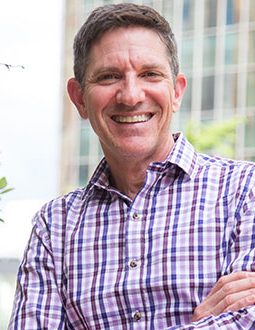 Youth focus: John Vitek was involved in a groundbreaking American study to understand why young people left the Catholic Church. He was invited to share the results in Brisbane. Photo: Emilie Ng

CHURCH leaders in Australia are ahead of those in the United States when it comes to finding new ways of evangelizing millennials, said the coauthor of a recent American study into disaffiliated Catholics.

John Vitek, the president and chief executive officer of Saint Mary’s Press in Minnesota, which commissioned a study into why young Catholics leave the Church, said US Catholics could learn from Australia about new models of evangelizing young people, including the approach taken by Brisbane Catholic Education.

“I think here in Australia the Church, especially here in Brisbane, is much further ahead of us in the United States on this issue,” Vitek said.

During a visit to Brisbane last week to speak at a research seminar organized by the Australian Catholic Bishops Conference Office for Youth, Vitek visited BCE and was left “inspired” by their Leuven Project, a strategy to promote Catholic identity in schools.

According to Professor Didier Pollefeyt, the Belgian Catholic theologian whose work heavily influenced BCE’s Leuven Project, recontextualization should be the “preferred theological option for Catholic schools.”

The approach “tries to understand the Christian faith reinterpreted in a contemporary cultural context to ensure that the faith remains recognizable, credible and meaningful for contemporary people.”

Vitek said it was a brilliant approach to evangelization and catechesis that could be helpful for the Church in the US, which used a “doctrinal catechesis model” in their Catholic schools.

“Tell them, teach them the doctrines of the Church from Grade 1 in its fullness and precise language of the catechism, and if we do this, they will conform their life to the doctrines,” he said.

“I can guarantee you there is not a single shred of evidence that would demonstrate there’s any truth to that approach.”

His involvement in a study on why young Catholics leave the Church affirmed the need for a renewed vision of evangelization and catechesis.

The study, titled Going, Going, Gone: The Dynamics of Disaffiliation in Young Catholics, is the result of a two-year project surveying, interviewing and analyzing the stories of 204 young people between 15 and 25 who once identified as Catholic but left the Church.

It was released on January 16 this year by Saint Mary’s Press and the Center for Applied Research in the Apostolate (CARA) at Georgetown University.

“Many of the young people we talked to—these are young people who were in religious education in the parish, went to Catholic schools—they hear these doctrines that are completely disconnected to their life and presented in a nondialogical manner, and they just simply turn it off and say it’s nonsensical,” Vitek said.

The qualitative, narrative-based research showed “there is no one reason” why young Catholics leave the Church, and most adults are completely wrong in their guesses.

“These tend to be the top three reasons adults guess but they are the lowest three reasons that young people leave. The number one reason, and again this is a gross generalization, is they simply don’t see it as necessary.”

While less than 30 percent of those interviewed found religion “nonsensical” or didn’t believe in God, Vitek said the majority did believe in God and weren’t necessarily opposed to religion.

Vitek said the Church didn’t need to apologize for its teachings, and that many young people who left the Church “were completely ignorant of the authentic teachings of the Church.” He said poorly trained catechists or parents “who just didn’t know better” may be to blame for a young person’s lack of understanding of Church teaching.

“I think there’s so much in Church teaching that they could resonate with but it’s how you engage with them,” he said.

Despite being part of this study, Vitek, who started working for the Church as a youth minister, admitted he had never asked why young people left the Church.

“I started in youth ministry work in 1982 as a parish youth minister and in the ’80s and into the ’90s, youth ministry was very robust in the States—(there were) high-level engagements, very active,” he said. “It was only the mid-’90s where things started declining a bit and I think it was happening gradually so we didn’t perceive it as much then.”

But a study by the Pew Research Center in 2007 “shocked” Catholic leaders when it revealed that 16 percent of the United States’ population had no religious affiliation.

“That is really when the alarm bells started going off in Church leadership,” Vitek said.

“I think up until then most of the Church thought, ‘We know it’s happening but maybe it’s not as bad as we think.’”

In 2014, Pew released another study showing people who identified as having no religion made up 22.8 percent of Americans, as opposed to a Catholic population of 22 percent. People of no religion were suddenly a larger religious demographic than Catholics.

“Now all of a sudden in 2014, everyone’s in a panic,” Vitek said. “Now it was irrefutable, and I think for many of us, it confirmed what we knew anecdotally. So that’s when we decided to undertake our study and ask specifically—we understand this is happening across all generations—but why in particular are young people disaffiliating.”

Halfway through the project, Pope Francis announced, almost coincidentally, that the next meeting of Catholic bishops would focus particularly on young people. He said the Pope’s willingness to hear the voices of all young people including the disaffiliated ahead of the Synod of Bishops on Young People, the Faith and Vocational Discernment, showed the Church needed to get better at listening.

“We sent a copy to Pope Francis and I think the stories of the young people in this study are the stories that Pope Francis wants to hear, wants the Church to hear,” Vitek said. “I hope the local churches bring forward these voices rather than the voice of the 10 percent who are highly engaged, although their stories are also very important and true and authentic to their lives, it’s not the predominant story.

“What I have seen is that when Church leaders hear the stories, they’re really affected and really changed by what they’re hearing and begin to think about how they carry out their ministry in really different ways.” While there were no easy solutions to bring young people back to the Church, Vitek said it all began with listening.

“My own sense is that it’s not that difficult; it’s about listening,” he said.