Let’s Make It Easier to Talk About God

Disaffiliation Does Not Equal Indifference: For Many, Belief Still Matters

Congregations participating in the Riverside Innovation Hub (RIH) practice four “artforms” as a means to discerning how they might best “innovate new connections with young adults at the intersections of their faith and their public lives.” (RIH) Those artforms are accompaniment, interpretation, discernment, and proclamation.

An earlier blog described the genesis and current status of RIH. In this week’s blog, we visit with two young adult RIH coaches and three congregational leaders at two participating churches.

Why Participate in RIH?

Amy: We were actually invited by the RIH designers to apply. Some of this we had already intuitively been doing, and [RIH] invited us to apply for the program so that we could learn from each other, go deeper systematically and lay out a framework to define things we’d been doing without definition.

Paul: We want to document what we are doing, not just do it intuitively, so the legacy can continue when leadership turns over. It has been challenging, getting us to think about how the process is going, what we are intentionally doing at every step. 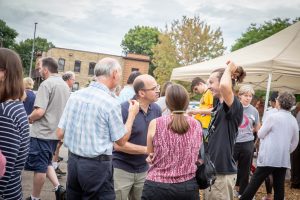 At University Lutheran Church of Hope, the annual “Welcome Back Students Festival” provides an opportunity for ULCH to engage with the community and listen to students, and for local businesses and organizations to connect with students, at the beginning of a new school year. (Photo courtesy ULCH)

Amy: RIH is a microcosm of everything we are doing right now, listening to young people and letting them tell, guide, and direct us where the church is going and can be meaningful for them, even though it’s not a traditional Sunday church form. What’s important, meaningful, resonates [with young adults], we are empowering them or giving them resources to help them build that.

We do a lot of outreach, in-reach, and so many different ministries within the Redeemer community, all of which revolve around listening deeply to the community we’re trying to serve. RIH is a very explicit picture of that, but what we’re doing with young adult ministry through RIH isn’t the only or most important ministry at Redeemer.

Nicholas: [At University Lutheran Church of Hope] we have built a vision goal of having porous walls, being engaged and building relationships with our neighbors and neighboring community. A lot of the vision of RIH were concepts that were bubbling up from the ground as we sought out ways to build porous walls. [RIH] affirms and helps us lean into that focus on porous walls, on being good neighbors.

The neighborhood has changed so much in the last 10 years. We had the sense that the congregation within our walls didn’t look like the neighborhood outside our walls. We didn’t want to be a church that served our neighbors with the mindset rooted in hierarchy and service out of the belief that we have what they need. Rather, we wanted to ask, “How do we become good neighbors?” Initially it looked like traditional outreach, but it has taken on more community engagement, community involvement— where the center is the neighborhood’s self-interest and not the parish’s self-interest.

Amanda: The language around porous walls is very similar to “existing for the sake of the neighbor,” a concept of RIH and the public church framework. It is not an attraction model, to get people outside to come in, but instead it is an action to move out of church walls and into the neighborhood.

Nicholas: Amanda adds a level of intentionality to that process, focuses our attention so those one-to-ones and the relationship-building in the neighborhood are not as ad hoc as previously. It also has helped to empower people in the congregation to take on new leadership roles. We intentionally tried to avoid thinking about programming. Because of where we are in the artforms, we focused on accompaniment and listening, stuff we should be doing, and ultimately that’s how you build porous walls.

What Have You Learned So Far? 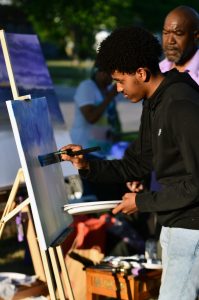 Amy: Young adults are wildly informed and engaged in their communities. They’ve thrown themselves into the work they are doing in the communities they are in. Some are struggling with the transition from college into the real world, but even as they struggle with the outside world they are each other’s anchor. It’s incredible to watch and inspiring. It all revolves around how to be community.

It is the early church, sharing all things in common, ‘they will know you are mine by your love.’ Young people who may not have a defined connection to Christianity and other religions are still living out these values of connectedness of all peoples.

Nicholas: Having already done some accompaniment and listening, there are some large themes we’ve picked up on [and want to] delve into deeper. Food insecurity is a major issue on college campuses—also loan debt, housing costs, and because of these, many students need to make decisions—rent or groceries? Also mental health is a consistent theme. The university itself is overwhelmed by mental health needs and students are overwhelmed by their needs and the lack of resources. Those themes consistently keep coming up. I would be shocked if in the future whatever comes up in listening or proclamation doesn’t intersect with either or both of those elements.

Michelé: I’ve found that we are eager to jump ahead to proclamation, but deeper listening must take place. An individual and group commitment to accompany others by first listening to them [is necessary].

For the remainder of this artform with both of my teams [each RIH Innovation Coach works with two congregations], we will go out to listen by asking a few questions—Where do you find peace or space to be beyond the church walls? What about this community brings you hope and what brings you anxiety? This work helps build the capacity to listen, to step outside of one’s comfort zone, and to see the good news that is dwelling beyond the church walls.

Amanda: We need to listen and accompany first, so it’s hard to have a concrete vision of where this will take us. We have an innovation team with five church members on it. Those five people and Nick will carry on this model into the work that they do. Maybe that means integrating into existing ministries, maybe innovating new ministries. After we go [RIH Innovation Coaches are in place for one year], the team does the work.