The Grace and Inspiration of the Disaffiliated

It’s not just the Catholic Church or mainstream Christianity that are experiencing a growing exodus of young adults from their ranks. The Muslim faith also is contending with the challenge of remaining relevant to its younger members.

Jenan Mohajir, Director of Student Leadership for Interfaith Youth Core in Chicago, spoke about that challenge as part of a panel presentation at a Saint Mary’s Press-sponsored symposium in January on the dynamics of disaffiliation in young Catholics from the Catholic Church. 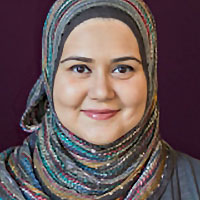 One response from within the Islamic community has been the emergence of “Third Spaces,” alternatives to the traditional American mosque. These Third Spaces often are noted for their practices of inclusivity and welcome, a strong social component, and an emphasis on relevance—especially to the lives of a young adult demographic.

“Oftentimes mosques as they are structured are not fulfilling the needs of a large portion of their communities,” Mohajir said at the Saint Mary’s symposium, held in Baltimore Jan. 16–18. “So you have these Third Spaces that pop up that are not necessarily prayer sanctuaries but are community centers where people who don’t resonate with their local mosque are able to be part of a larger community; [they] still want to identify as Muslim, still want to hold on to that part of who they are but maybe they aren’t practicing in the same way.”

Motivated by a similar “come as you are” philosophy is MakeSpace, a self-proclaimed Muslim Third Space in Washington, DC. This community is the subject of a case study in the “Reimagining Muslim Spaces” project conducted by the Institute for Social Policy and Understanding (ISPU). An opinion survey conducted by ISPU on the demographics and motivations of MakeSpace participants reported these major attractors:

One 24-year-old, female survey respondent said that young people are particularly vulnerable to feelings of criticism or judgment that they may experience in a traditional mosque community. In the Saint Mary’s Press study on disaffiliation, a number of young former Catholics reported feeling similarly uncomfortable in traditional Catholic church settings.

At MakeSpace, an atmosphere of nonjudgmental welcome pervades, the Muslim survey respondent said.

“Even if you have the niyah [explicit intention made before an act] of doing something for the sake of Allah, that goes away because of the negative energy and the feeling of being invalid or insufficient, which is something that really should be between a person and God. For youth specifically, [who] are naturally self-conscious and insecure, when you enter a space that is critical of how you’re worshipping, something as intimate as that, it can be crushing. [At] MakeSpace whenever you go to prayer . . . people are smiling and they’re happy and you feel adequate. You feel like you belong in that space. You don’t have people actively judging you.” (Understanding Inclusivity Practices at “Third Spaces”: MakeSpace: A Case Study, Sept. 17, 2016)

What are the Third Spaces for young adult Catholics seeking an alternative to more traditional church settings? For those young adults who report feeling excluded, judged, irrelevant, or isolated in their home church or parish, are there spaces to gather outside church walls yet still within the larger Catholic community? Places where they can explore faith, experience community, find welcome, seek understanding, and share their stories? If you know of such spaces, we invite you to share them in comments to this blog, or email to research@smp.org.