Marjory Stoneman Students and the Responsibility to Speak

Devon Watts: “Loving a Church That Sometimes Doesn’t Love Me Back” 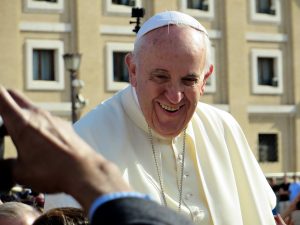 Pope Francis is using Facebook and other social media to cast a wide net in hoping to learn more about the experiences of young people, both inside and outside the Catholic Church. The effort comes in anticipation of an October Synod of Bishops on the theme: “Young People, the Faith, and Vocational Discernment.”

The Facebook opportunity is but one of several efforts aimed at assisting “young people to produce a document, which expresses their view on the state of things, their ideas, their feelings and their recommendations, to be presented” to the October synod, said a statement on the web page for the Synod on Youth.

Also, on March 19–24, 2018, in Rome, the pope will convene a meeting for young people in anticipation of the same October synod. At the Angelus on Sunday, Feb. 18, the pope emphasized his desire that any young person wishing a voice at the March meeting make himself or herself heard. “I strongly desire that all young people might be the protagonists of this preparation,” he said.

An often frustrated desire to speak and be heard describes the experience of many young people who leave the church. That’s one of several findings in the Saint Mary’s Press research study, Going, Going, Gone: The Dynamics of Disaffiliation in Young Catholics (2017). The study’s goal is to listen to those who have left, in order to better understand their reasons for disaffiliating and to allow them a listening ear and a forum to tell their story.

“We desire to hear the life stories, the reasons for disaffiliating from the Church, in youth and young adults’ own words,” the authors of the study said. “To listen and to hear the stories of those who disaffiliate from the Church are essential and constitutive dimensions of what it means to be a community of faith.”

Said one of those interviewed for the study: “I’m glad to actually finally tell my story. I have never really sat down and told anyone. Thank you for listening.”

The pope began priming the pump for the pre-Synodal March gathering last year. At an April 8 prayer vigil, Pope Francis said: “The entire Church wants to listen to young people: to what they are thinking, to what they want, to what they criticize and to what they are sorry for.” In October 2017, he emphasized the inclusive nature of his invitation to young people to share their experiences and concerns: “All young people from around the world are invited,” he said of the March event, “young Catholics, young Christians from other denominations or other religions and young nonbelievers.”

About 300 young people will attend the pre-Synodal event. Can’t be in Rome to share your thoughts and feelings in March? That’s where the social media opportunity comes in—any young adult who wishes to participate and to have a voice at that gathering can do so via Facebook. The invitation on the Vatican website states:

If you are between 16 and 29 you are invited to participate in the pre-synodal meeting. A summary of all the responses from the Facebook group will be included in the drafting document of the final conclusions, which will then be presented to the Holy Father.

Remember that your Facebook profile must be “real and personal,” in that it must represent you personally and not a group, institution or cause. The moderator of the group will verify the authenticity of your profile.

The questions that will be asked during the pre-synodal meeting will be available on the Facebook group on Monday, March 12, from which point you are invited to respond.

Please keep answers relevant to the themes of the questions, using respectful and friendly language. The administrator will remove access to any contributors who do not follow these instructions.

If you have already disaffiliated from the Catholic Church, you might think of the pope’s invitation as an exit interview, your opportunity not only to voice disappointments, dissatisfactions, or other reasons for your leaving, but also to help the Catholic Church to be better informed about what you (and no doubt thousands of others) need and expect and are searching for to build a more satisfying and rich life.

If you are still a member of the Catholic Church—even if holding on by only a thread—take this opportunity to let the church know who you are and what has been your experience within the church.

Finally, if you prefer to use this website as a forum to express your views, please do so in the spaces provided for comments.